Letters to Lovecraft is our newest genre-blending anthology of original fiction, and to ring in the new year for our readers we’ll be posting excerpts from each of the stories. Few authors can successfully juggle absurdest humor with a palpable sense of dread, but Jeffrey Ford is in a class of his own. We think his “Order of the Haunted Wood” is just the thing to get you bright eyed and bushy tailed on a cold Monday in the depths of January…

The past evolves into the future, and, with training, one can spot it in its new guise, the way a dinosaur can be found in a raven by a paleontologist. As with creatures, so with traditions. The ancient moves among us in our rituals. One of the most fruitful of enterprises a scholar can undertake is to trace the trail of evidence from the dawn of humanity to this very moment.

Take for instance the Order of the Haunted Wood, a secret society that is still not widely known but whose influence has been persistent. Its traditions and rituals go back, most likely, to some pre-language era when humanity was barely out of the trees. The purpose of the Order was, through the use of supernatural forces, to bestow fertility on those of its members who needed it. In clandestine night meetings, they summoned the spirit to enter the bodies of the afflicted, and, as Baron Menifer recorded (1453) in his Practices and Preachments of the Order of the Haunted Wood, “that which lay down, rose up.”

There are scant accounts of the group’s doings through the centuries, because it was frowned upon for members to speak openly about its affairs, but there were enough initiates who broke with that code to allow a basic understanding to be able to now be pieced together. Literal mention of the Wood died out somewhere around the beginning of the 20th century, although some scholars point to a notice in a local newspaper from Manhattan in 1972, a tiny piece in its want ads that read, “TOOTHW, midnight, Wash Sq. Prk,” as evidence of the society’s continued existence.

One need not grasp for such flimsy proof of the society’s pervasive influence, though. All one need do is turn on the television, sit back, and, before long, on any channel, you will come across a commercial for a product that addresses the problem of erectile dysfunction. These commercials, whether the viewer knows it or not, are bursting with the symbology and ritual of the Order. There are those who will, but I won’t go so far as to suggest that the Haunted Wood is directly behind these products and their ads. I subscribe to the notion that what is played out in the seemingly insipid dramas of these minute-and-a-half promos comes from a kind of collective unconscious, an ancient spell that has twined its way through the history of male minds to blossom anew, metamorphosed, in the fleurs du mal of advertising.

You know the commercials first by their music. Notice the snare drum played softly with brushes at a calm but steady pace while the flute and saxophone carry a lilting metronomic harmony. The setting is always well-to-do, upscale, in living rooms and kitchens furnished as if from the pages of Better Homes and Gardens. The implicit message is the poor can’t afford an erection, and, since it is always a male and female couple, none but heterosexuals deserve one… 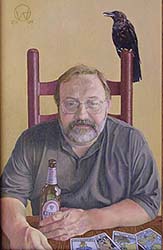 is the author of the novels The Physiognomy, Memoranda, The Beyond, The Portrait of Mrs. Charbuque, The Girl in the Glass, The Cosmology of the Wider World, and The Shadow Year. His story collections are The Fantasy Writer’s Assistant, The Empire of Ice Cream, The Drowned Life and Crackpot Palace. Ford has published over one hundred twenty short stories, which have appeared in numerous journals, magazines and anthologies, from MAD Magazine to The Oxford Book of American Short Stories. He is the recipient of the World Fantasy Award, Nebula Award, Shirley Jackson Award, Edgar Allan Poe Award, Grand Prix de l’Imaginaire (France) and Hayakawa Award (Japan). His fiction has been translated into over twenty languages. In addition to writing, he’s been a professor of literature and writing for over twenty-five years and has been a guest lecturer at the Clarion Writers’ Workshop, the Stone Coast MFA program, the Richard Hugo House in Seattle and the Antioch Writers’ Workshop. He lives somewhere in Ohio.