Letters to Lovecraft is our newest genre-blending anthology of original fiction, and to ring in the new year for our readers we’ll be posting excerpts from each of the stories. Today’s entry comes to us in the form of a a screenplay by gentleman skeleton Orrin Grey. One has to wonder, though, is this an adaptation of a story by horror maestro Gordon Phillips, or something more biographical?

It’s a scene straight from the pages of one of Gordon’s earlier, more lurid stories. The graveyard scene. Dana and Conner as the latter-day resurrection men, tramping across the swampy ground in the pissing rain with a battery-powered lantern and shovels that they picked up at Home Depot.
Dana’s hoodie is pulled up against the weather, her glasses spattered with drops that she can’t wipe away completely because her sleeve is too damp. She wears black leggings under her jeans for warmth, but you can only tell in the places where her jeans are worn through. The shock of purple in her otherwise brown hair is hidden by the darkness and the wet.

Conner is a good foot taller than Dana, wide at the shoulders. If he were a character in a movie, he’d play basketball or football, be wearing a letter jacket. Instead, he plays chess and video games, can’t stand most sports, though he’s been known to do Frisbee golf on occasion. He wears a leather jacket that repels the rain, and one of the shovels is over his shoulder, while Dana carries the lantern and the other shovel. His jacket hangs unevenly due to the weight of his father’s Colt .45 in his right pocket.

The lantern’s light is golden and seems very small in the graveyard, picking out just the edges of tombstones that seem to lurch out of the darkness in its uneven light, leaving everything else to shadow and rain.

DANA: Fuck Gordon for this, y’know?

From the tone of her voice, and from Conner’s non-reaction, you can tell it’s not the first time tonight that she’s said these words.

DANA: Fuck him for leaving this to us, and fuck him for convincing us to do it in the first place. And you know what? Fuck him twice for knowing that we would do it.

Conner doesn’t say anything, just trudges on ahead while Dana stops to wipe off her glasses again, this time taking them off and fishing under her hoodie for the edge of her relatively dry T-shirt.

DANA: He really is the Danny Ocean of this little trio, and no mistake.

CONNER: Frank Sinatra or George Clooney? Not that it matters much, I just call dibs on not being Sammy Davis Jr.

DANA: Not really any good parts for me, though I’d take Julia Roberts over Dana Phillips right about now.

CONNER: Maybe that’s what the next one of those movies oughta be about. Grave robbing.

Both of them stop, the banter dead on their lips. They’ve come to wherever they’re going, now. The lantern swings in Dana’s grip, the radius of light moving up and down, revealing the inscription on the stone before them, then hiding it again. In the light the stone is fresh, smooth and unblemished, and the name on it is clear: Gordon Phillips… 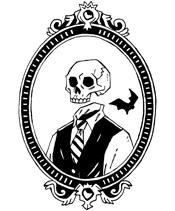 is a writer, editor, amateur film scholar and monster expert who was born on the night before Halloween. He’s the author of Never Bet the Devil & Other Warnings and the coeditor of Fungi, an anthology of weird fungus-themed stories. You can find out more at orringrey.com.