Letters to Lovecraft is our newest genre-blending anthology of original fiction, and to ring in the new year for our readers we’ll be posting excerpts from each of the stories. To usher you off into the weekend we’ve got something by Gemma Files, a midwinter excursion to “That Place.” With a master’s touch Files invokes that nigh-universal childhood ritual of inventing odd games to play, exclusive games that only a privileged few ever even learn of, and combines the richly esoteric workings of young imaginations with a chilling proposal. It’s just the thing for these long winter nights when you’re trapped inside the house with nothing to do…

So say two sisters finally come back home, after their parents die — twins. Their names are Holly and Heather. They have a younger brother, Edwin, whom they haven’t seen for some time. Estrangement’s grown up between them all, for no apparently good reason. It’s sad, but these things happen.

Holly and Heather attend university in Toronto. They also room together, because why not? They’ve always been like that. They can’t ever remember being apart.

Edwin never went to university. He finished high school, then trained as an auto mechanic, so he works all year round. He does most of his calls along the rural routes of northern Ontario, circling the area where they used to live, in Lake of the North District; his specialty is extending the life of trucks and four-wheelers, fighting planned obsolescence on behalf of people who can’t afford to trade up. Distance is an issue, up there. If you can’t drive, you can’t do much of anything.

One night Holly gets a call — it’s Edwin. Mom and Dad are gone, he says. Accident, out near Overdeere. Black ice pile-up. You need to come into town to hear the will read, then muck out the house with me.

The girls know this isn’t going to be easy, either way; it’s not like their parents were hoarders, as such, but they did tend not to ever get rid of anything. There’s a lot of stuff to appraise, most of it probably worthless, except on an emotional level. But it’s got to be done.

We’ll live there while we do it, Heather decides. Go up just after midterms, spend a few weeks. It won’t take longer than that. Not if we don’t let it.

“Town” is Chaste, up past Your Lips, almost to God’s Ear. Five traffic lights, a church, a school, a gas station strip mall, and a clinic that does double duty for Quarry Argent. Around it, there’s a network of small farms, plus acres of uncut woodlots. Cabin-style houses here and there, like the one they grew up in. It took thirty minutes to drive to the town limits, then twenty more to walk in, so days started early, up before dawn. Insects singing in summer, dark and cold and silent all winter. 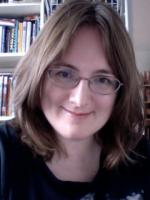 and teacher turned award-winning horror author Gemma Files is best known for her Hexslinger series (A Book of Tongues, A Rope of Thorns and A Tree of Bones, all from ChiZine Publications). She has also published two collections of short fiction (Kissing Carrion and The Worm in Every Heart, both from Wildside Press) and two chapbooks of poetry. Her most recent book is We Will All Go Down Together: A Novel in Stories About the Five-Family Coven (2014, CZP).