Swords v. Cthulhu is our newest genre-blending anthology of original fiction, and as it shambles toward its summertime publication we’re going to be posting excerpts from each of the stories. Our next teaser is from Remy Nakamura’s “The Dan Uchi Horror.” Imagine Takashi Miike doing to Lovecraft what Kurosawa did to Shakespeare and you’ve got an idea for the feel of Nakamura’s dark, violent, and sensual samurai thriller…

Takeda Inochinomi, Arakage’s daughter, knelt in the mud. In final position for seppuku, the point of her tanto dagger hovered, ready to strike. The blade quivered, swaying with her breathing like an edgy viper.

Honor. This was the way of the warrior. Her father’s way. He died with such honor. She served as his second, beheaded him with a powerful stroke. Ended his agony as his intestines spilled over his tanto. In her mind’s eye, his head came to a stop, glaring at her. Honor, his eyes rebuked her.

Night crept closer, the forest bleeding shadows, heavy rain and the altar-like mountain of Dan no Uchi conspiring with her pursuers. So close to her uncle’s monastery, and she had no light. She could barely see her weapons—her naginata, a bamboo bow, a nearly empty quiver—just an arm’s reach away. The lead scouts would catch her first. Perhaps the half-demons could see in the dark. Or track her like hounds. No choice. No hope.

She focused her mind inwardly on the image of Amida, washed with gold. She mouthed the mantra, Namu Amida Butsu. Praise Amida Buddha. Inhaled smells of rain, wet earth and damp decay. Her hands steadied, but then her father’s head replaced the Buddha’s, blood oozing, staining the statue’s lustrous neck. Honor.

She looked up at the apparition that seemed to hover before her, glowing in the deepening night.

The gruesome vision began to fade.

“If you had honor, your daughter would not be kneeling half-naked in the mud, with no light, no second to end her suffering.”

She opened her hands. Dropped the knife.

The ghost was gone. Hot tears mixed with cold rain. She wiped them away. Pulled her kimono back up over her arms and chest. Tightened her sash. Groped in the dark for her dagger.

“I could be your second!” 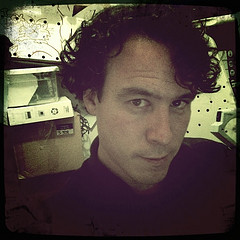 Remy Nakamura graduated from the Clarion West Workshop in 2010. His short story sales include “Forbidden Feast at the Armageddon Cafe”, which was sold to Edge Publishing’s Rigor Amortis anthology and as a reprint to the Pseudopod Podcast, and “Semele’s Daughter”, which was sold to the Broken Time Blues anthology, and most recently, “On Love and Decay” to the Not Our Kind anthology.