Schemers is the latest genre-crossing anthology of new short fiction from Stone Skin Press. From the classic myths to the pages of the Bible, from Shakespeare’s stage to the yellowed pulps of yesteryear, literature runs red with tales of plotting and betrayal.

While some of the book’s all-new stories evoke past eras, other contributors from our cross-disciplinary roster examine the state of betrayal in the ever-present, electronic now. Kyla Ward’s “Character Assassin” enters the headset-wearing, trash-talking arena of obsessive MMO video gaming to propose the fresh category of murderer it might spawn.

A massively multi-player online game is a world. That’s what non-gamers never understand. It doesn’t exist inside

a computer, it exists in the aether where thousands of players come together as digital avatars. This world is where those avatars live and grow, form friendships, fight battles, win riches and renown. It is also where they die. And on October 18, just after two in the morning, Zinderzee the sixty-seventh level elven priestess died for perhaps the thousandth time.

It was her twenty-third death in this complex alone and this in a region well within her capacity to solo. But two characters of superior level entered in her wake and, instead of accepting her group invitation, killed her. They had harassed her ever since, striking her down each time she came upon them in the meandering tunnels. The resurrection point was set at some distance from the entrance and each death necessitated the same run in spirit form back to her body.

Zinderzee says what’s with you jerks? Stop this or I’ll make an official complaint!

Finally giving up in disgust, Zinderzee discovered that by some means her teleport base had been reset from the central metropolis of Sharkal to the Bloodswarm Marsh. When Peter Sterling exited the game, she was quite alive, though standing in a tavern empty save for the goblin barkeep and a over-affectionate swamp demon. He did not leave her, as some do, standing, staring at the resurrection prompt, and nor did he delete her. So I count the moment of Zinderzee’s final death as that when he canceled the auto payment of his monthly subscription fee. 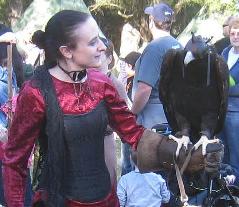 Kyla Lee Ward is a Sydney-based creative who works in many modes. Her latest release is The Land of Bad Dreams, a collection of poetic nightmares. Her novel Prismatic (co-authored as Edwina Grey) won an Aurealis. Her short fiction has appeared on Gothic.net and in the Macabre and New Hero anthologies, amongst others. Roleplaying games, short films and plays — if it can be done darkly she probably has, to the extent of programming the horror stream for the 2010 Worldcon. A practicing occultist, she likes raptors, swordplay, and the Hellfire Club.